“Tent of Understanding” stitches Ukraine together

On March 25, the International Documentary Film Festival Docudays UA brought into the spotlight the presentation of the results of the project “Dumaidan (ThinkMaidan)- 2017: Together in the Tent of Understanding”. 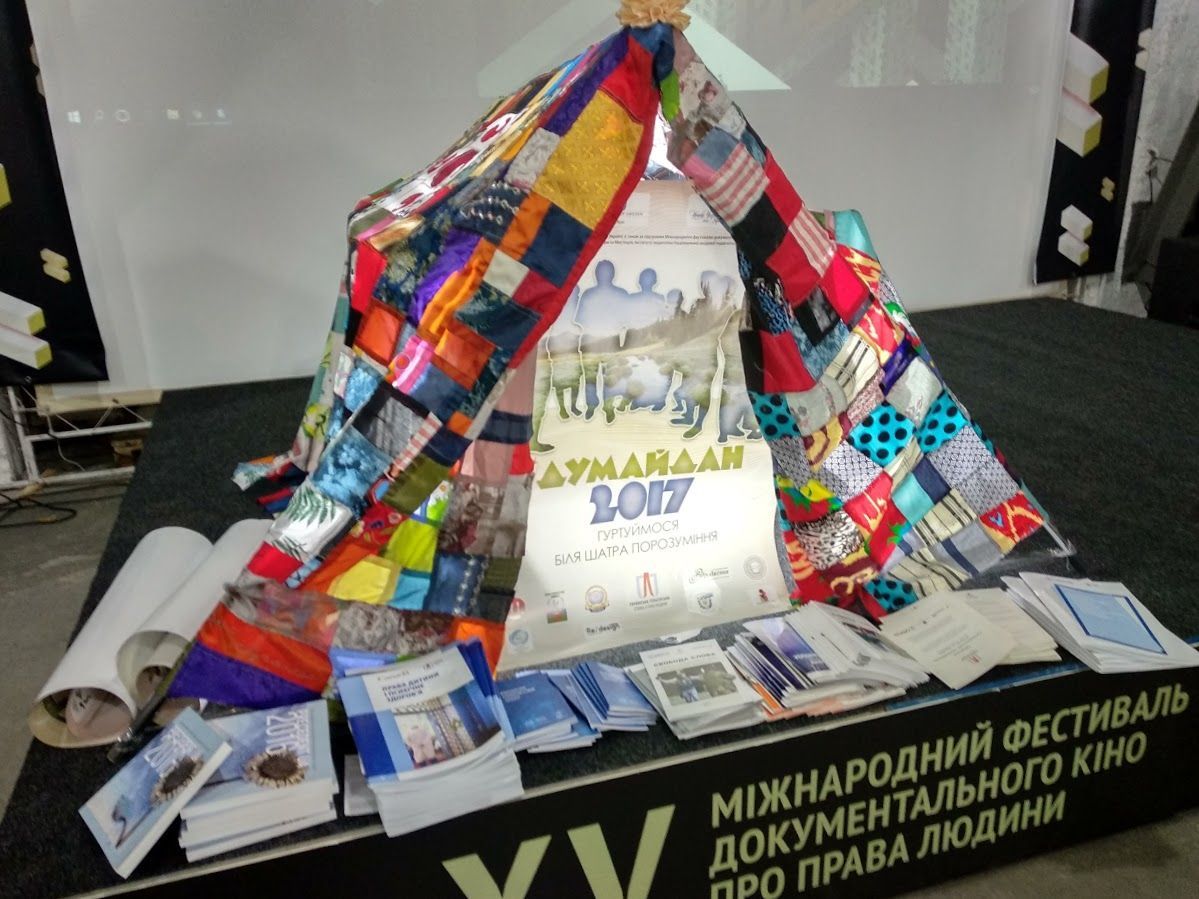 On March 25, the International Documentary Film Festival Docudays UA brought into the spotlight the presentation of the results of the project “Dumaidan (ThinkMaidan)- 2017: Together in the Tent of Understanding”. The Festival also featured the charity auction dedicated to the sale of “Tent of Understanding” and special lots, such as breakfast talks with well know Ukrainian intellectuals Yevhen Bystrytsky, Joseph Zissels, Olexandr Pavlichenko and Arkadiy Bushchenko. The money received from the auction will be transferred for treatment of two seriously ill project participants: Rita Pastrami, Romani from Zhytomyr, and Olena Ch., internally displaced person from Crimea, currently residing in Kyiv, whereas the remaining money as a prize fund will be transferred to a selected Ukrainian documentary film, in which the topic of equality is best addressed.

“Tent of Understanding” is a tent made from multi-colored cloth fragments stitched together by participants of master classes and discussions held in different cities of Ukraine on topics of tolerance, ethnic policy and human rights. The creation of the “Tent of Understanding” began in February 2017. This creative project was initiated by the Ukrainian Helsinki Human Rights Union. Such joint creative work, combined with communication, helped eliminate misunderstandings among participants from different ethnic and cultural communities of Ukraine.

“For many years, the International Renaissance Foundation has been helping to create the environment of respect for human rights and strengthen the involvement of vulnerable groups of population, in particular, the Roma, in decision making processes at the local and national levels. Therefore it was important for us to join this project. It helped unite representatives of different ethnic and cultural communities around the common cause, whereas the original format of the project helped establish friendly dialogue between them”, explains Sergiy Ponomaryov, the Roma Program Initiative Manager of the International Renaissance Foundation.

The multi-colored “Tent of Understanding” reflects the diverse national composition of the Ukrainian society and reminds us that in order to ensure the unity of the country, all ethnic groups must find common ground with each other. More than a hundred participants from different regions of Ukraine and different backgrounds took part in the creation of the Tent. In particular, the following poets and writers joined the “stitch-work”: Bogdan-Oleg Gorobchuk, Ella Yevtushenko, Ivan Semesyuk, Oleg Kotsarev, Alexei Nikitin, Galina Tkachuk, Dmytro Lazutkin, Oleg Romanenko, Olena Stepanenko, Artem Zakharchenko, Oleg Shynkarenko and Olga Bragina.