Sex for money: a service or a crime?

On March 25, within the framework of the International Documentary Film Festival Docudays UA , a public discussion was held on the topic “Sex for money: work or slavery?”, as organized by the Human Rights Information Centre. 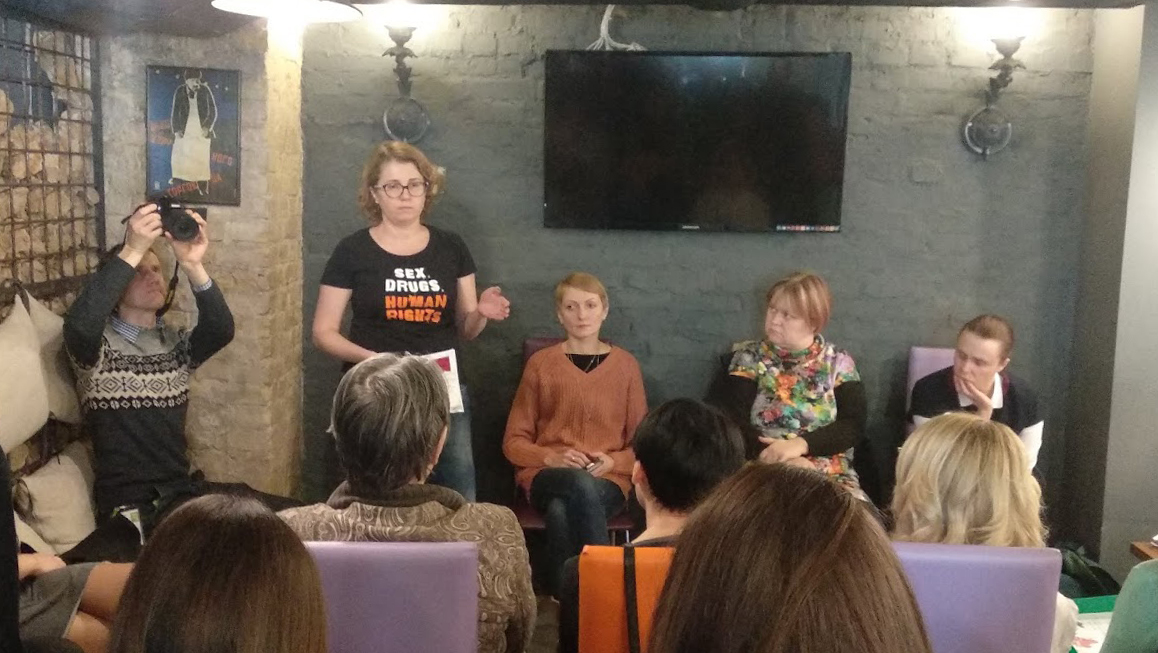 On March 25, within the framework of the International Documentary Film Festival Docudays UA , a public discussion was held on the topic “Sex for money: work or slavery?”, as organized by the Human Rights Information Centre. The advocates of various approaches discussed the social consequences and implications for public health resulting from implementation of different models of the public policy on sex work.

For many years, the International Renaissance Foundation has been supporting the efforts of civil society to promote respect for human rights, including non-discrimination and the right to access to health care. Legislative regulation of sex work means, among other things, to ensure equal access of sex workers to medical treatment and health care. Sex workers are vulnerable to various diseases and violence, so the legislation should be structured in such a way as to make impunity for violence impossible and, at the same time, to ensure the right to access to medical care on an equal basis with people of other occupations.

Nowadays in the world there are many models of public policy on regulating sex work. For example, in Germany and the Netherlands sex work is permitted and regulated by law, in particular, rules on age restrictions and licensing of brothels are in force. However, in Sweden sex for money is illegal and entails criminal punishment in the form of fines for clients.

Ukraine is only at the beginning of the path to determine the model of the public policy on sex work. It should be noted that when choosing a model, it is necessary to involve sex workers in consultations so as to not to repeat the experience of Sweden. After all, the Swedish model has deprived the sex workers of actorship in this process: the public policy in this area is based on the assumption that all sex workers are victims. However, this is a distorted understanding of the situation, because sex work can be a voluntary and conscious choice.

Currently the Ukrainian legislation provides for administrative punishment for sex work under  Article 181.1 of the Code of Administrative Offenses. However, alternative proposals were also made: in 2015 the draft law “On Regulation of Prostitution and Activity of Sex Institutions” was submitted to the Verkhovna Rada (the Parliament) of Ukraine. However, in the same year the draft law was withdrawn.

“It is worth dividing the concepts “human trafficking” and “voluntary sex work”. These two phenomena should not be equated. Our opponents that equate these two concepts, often manipulate them in their rhetoric, and use them as a basis to develop their line of reasoning and relevant policies (such as the Swedish model)”, saysOlena Kucheruk, the Public Health Program Initiative Manager.

Human rights activists emphasize: decriminalization of the sex industry is necessary in order to improve the quality of life of sex workers and to ensure the respect for human rights. There are successful examples of this approach in the world. In 2003 New Zeland decriminalized prostitution, which the local Union of Prostitutes sought for many years. Also in New Zeland the Committee for Supervision over Reforms in the area of Prostitution was established, which included sex workers themselves and the representatives of several ministries. The purpose of the Committee is to monitor law compliance and monitor the consequences of the law implementation for sex workers. Research has shown that it became easier for sex workers to refuse clients, to communicate with the police and that the attitude to sex workers improved.

Whatever model Ukraine decides on, the main thing to keep in mind is that sex workers are a vulnerable group and therefore the legislation should be structured in such a way as to make impunity for violence impossible and, at the same time, ensure the right to access to medical care at the same level as that for people, who have chosen different occupations for themselves.