In the first three weeks of Russia’s full-scale war with Ukraine, we have supported 80 requests and spent 22 million hryvnias to help Ukraine, our defenders, and civil society.

Most of the money went to protect our defenders, evacuate civilians from dangerous cities, and meet medical-humanitarian needs.

The overall distribution of costs is as follows: 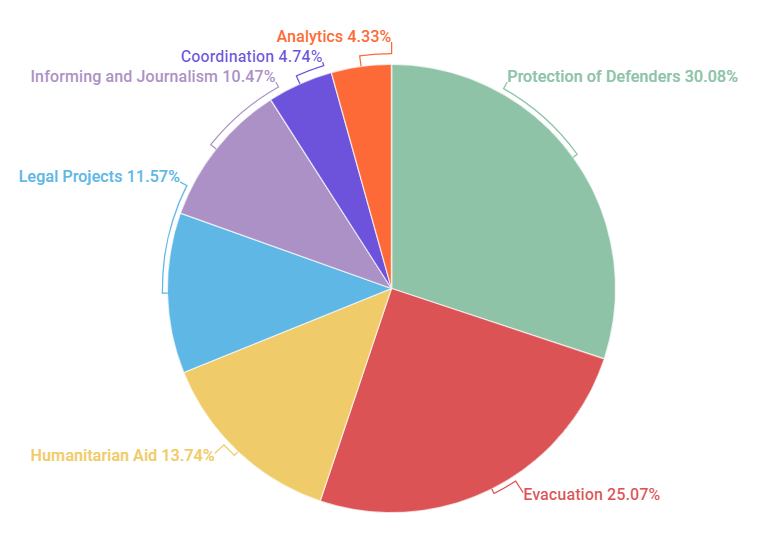 We spent over 30% of the money protecting our defenders, both the Armed Forces and the Territorial Defense Forces. We have met more than 30 requests from military units and volunteer groups from the front line and nearby: ammunition, drones, fuel, medical supplies, etc. This contribution is the least we could do in the early days of the war to pay tribute to our defenders.

About a quarter of the funds went to help with the evacuation. The lion’s share of this money went to help women, children, and the elderly from Kyiv and the surrounding area who could not leave by themselves. For people who evacuated from Kharkiv, we helped set up a shelter in Cherkasy. We also helped activists from the East of Ukraine and more than 70 journalists to move to safe places.

About 3 million hryvnias were spent on humanitarian projects – mainly the purchase of medicines and materials for hospitals in Kyiv, Kharkiv, Irpin, Brovary, Boryspil, and other medical institutions near the frontline and hotspots. Part of the funds went to procurement for doctors working directly on the front line. Several inquiries concerned essential goods for vulnerable groups and the purchase of fuel for volunteers delivering business assistance.

Legal Projects. We support collecting and documenting information on Russia’s war crimes in Ukraine. In addition, we support the provision of legal aid to victims of the war, including displaced persons.

Informing and Journalism. In this category, we support projects that help tell the truth about the war to foreign audiences, both in the west and in the enemy’s rear. We also support the work of some media outlets that have been left without advertising funds and whose work on documenting the war is important: the Military Portal, Ukraїner, Slidstvo.Info, and others. We plan to launch support for more media soon.

To coordinate the efforts of volunteers, we support the administrative work of the Return Alive Foundation and the work of the People for Ukraine portal (people4ua.com).

Supported analytical projects include monitoring, research, and dissemination of information on the impact of war on civilians by CEDOS and the study of the social and humanitarian needs of migrants by the Democratic Initiatives Foundation.

In addition, we advocate for Ukraine’s interests abroad daily and show information about the war to Western experts, journalists, and government officials.

What’s next? We will continue to support Ukraine and its civil society in the fight against Russian aggressors. Our priorities are strengthening the humanitarian and media support, international advocacy, and helping the Open Society Foundations launch the Ukrainian Democracy Foundation, a new foundation set up by George Soros to help Ukrainians save and protect Ukrainian civil society.

There is still a lot of news ahead. And definitely – our victory.

Author: O.Kulchytsky
Category: News
If you find an error, please select a piece of text and click Ctrl + Enter 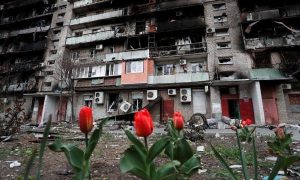