On June 21, in Kyiv, civic experts presented a series of specific sanctions, which they propose for the EU to introduce against Russia over its actions in the occupied Crimea.

On June 21, in Kyiv, civic experts presented a series of specific sanctions, which they propose for the EU to introduce against Russia over its actions in the occupied Crimea.

Starting from April 2014, Ukrainian non-governmental organizations “Maidan of Foreign Affairs” and “Black Sea Strategic Studies Institute”, jointly with the internet publication BlackSeaNews, monitor the violations of sanctions imposed by the EU, the United States and other countries against Russia in response to the occupation of Crimea. This work is supported by the International Renaissance Foundation.

In the last year, the monitoring group of three organizations established new facts of sanctions violations by Russia, namely as follows:

Andriy Klimenko, head of the monitoring group, editor-in-chief of BlackSeaNews, said that 95% of information was obtained from open sources.

In particular, the analysis found that:

The documented list of violations by Russia of international sanctions and specific proposals for the introduction of new sanctions were sent to the EU High Representative for Foreign Affairs and Security Federica Mogherini, as well as to the diplomatic missions.

Dmytro Shulga, Director of the European Program of the International Renaissance Foundation, called the proposals of civic experts “ambitious, but realistic”.

“This is a unique response to the frequent question of the Europeans: what else can we do? It is the fifth year of occupation of Crimea. There is a certain reaction of the international community, economic sanctions were imposed… We can, of course, fantasize about the global economic blockade that would force Russia to leave Crimea, but we understand it is improbable. At the same time, tactics of “small cuts” can increase the price of Crimea for the occupier and be powerful for Ukraine”, – said Dmytro Shulga.

Video of the press conference can be watched following the link: https://goo.gl/Z84t1v 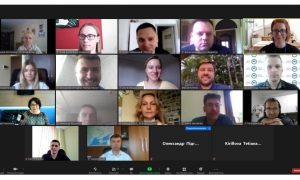 17 organizations that received grant support from the Foundation under the EU4USociety project, conducted a training “The School of Budget Advocacy”