On December 2, 2016 the Transcarpathian Roma Association for Musical Culture “Lautari” organizes the 19th International Romani Festival of Jazz Art "Pap-Jazz-Fest-2016" in Uzhgorod, in the regional puppet theatre. The festival begins at 5 p.m.

On December 2, 2016 the Transcarpathian Roma Association for Musical Culture “Lautari” organizes the 19th International Romani Festival of Jazz Art “Pap-Jazz-Fest-2016” in Uzhgorod, in the regional puppet theatre. The festival begins at 5 p.m. 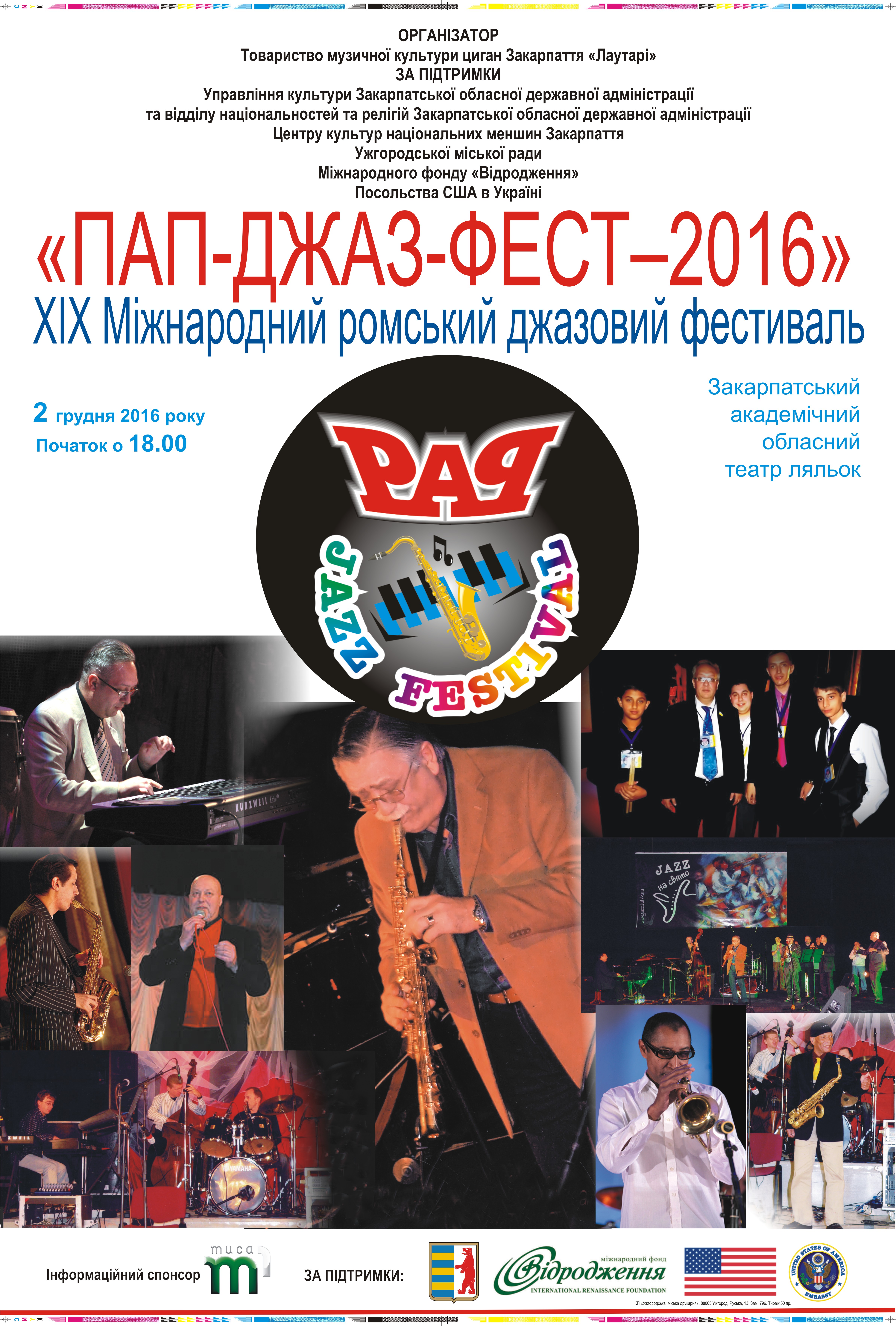 Transcarpathia is one of the most multinational regions of Central Europe. Along with other nations and peoples, more than 30 thousand Roma (in origin) nationality (almost a quarter of Roma in Ukraine) live in the region.

At the totalitarian time of the former Soviet Union, jazz as a kind of pop music was actually banned, considered as a manifestation of “decadent” bourgeois culture. Talented artists, along with a group of Carpathian Roma jazz musicians, had to do their favorite work almost secretly. Thankfully, this art has not vanished from Ukrainian music space. Today, hundreds of young jazz musicians are able to perform themselves at both the amateur and the professional levels.

Jazz forums “Pap-Jazz-Fest”, which has been taking place in Uzhgorod already over 19 years, has become an important stimulus for the revival and development of jazz. The Transcarpathian Roma Association for Musical Culture “Lautari” organizes the Festival.

During the years, the festival scene has been visited by foreign and local musicians like saxophonists Peter Cardarelli and Monty Waters, trumpeter Michael “Patches” Stewart, guitarist Mark Whitfield (all of them are from the USA), saxophonist Edward Namyslowski (Poland), drummer Dodo Shoshoka (Slovakia), guitarists Botos Tybi and Kerekes Oli (Hungary), Soviet jazz legends Yevgen Dergunov, Valeriy Kolesnykov, Vyacheslav Poliansky, Volodymyr Solianyk (Ukraine) and many others. A constant member of the organizing committee and all festivals’ “Pap-Jazz-Fest” host is a well-known music critic Petro Poltarev from Kyiv.

Performances of the world-class jazz stars like Mike “Patches” Stewart and Eric Marienthal (USA) and international Romani jazz ensemble “Jazz manouche” (Slovakia, Hungary, Poland) will be the highlight of this year’s festival. Of course, as always several leading Ukrainian bands, including the “Pap-Jazz Quartet” and Roma youth jazz ensemble “Lautari” of Uzhgorod will participate in the festival.

The festival will be held by drumming up support of the Culture and Nationalities and Religion Departments of Zakarpattya Regional State Administration, Uzhgorod city council, the International Renaissance Foundation, the US Embassy in Ukraine, some sponsors and patrons.

“Pap-Jazz-Fest” has become a kind of an invitation of Uzhgorod, which because of such events is taking back its image of musical and art center of Europe. Another important thing about the festival is that supporting international cultural initiatives, it promotes the integration of Ukraine into the international cultural space, the development of different forms of art and cultural achievements exchange between Ukraine and other states.