Benefits of Europeanization for Ukrainians

Kyiv hosted the expert discussion “Arguments for Europeanization: Information for Ukrainian”, dedicated to the EU-Ukraine summit 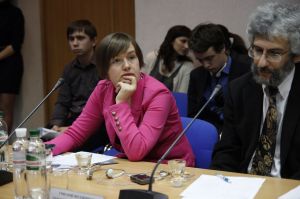 On December 15 Kyiv hosted the expert discussion “Arguments for Europeanization: Information for Ukrainian”, dedicated to the EU-Ukraine summit. Civic Expert Council organized it with support of the European Program of the International Renaissance Foundation, UNITER, and USAID.

Experts brought forward the qualitative arguments on the fruits of Europeanization and introduced the survey results of its impact on different social spheres. “Greater well-being for Ukrainians, duty-free access to the world’s largest single market, greater access to third country markets and a better internal investment climate,” these are the benefits of a free trade area (FTA) between the EU and Ukraine as Veronika Movchan, Academic director of the Institute for Economic Research and Political Consultations, explained.

A visa-free regime with the European Union is one step on the way to European integration whose sense and advantages can be felt by every single citizen. “If Ukrainians are able to travel freely and get a sight of living in other countries, they will give a full list of criteria to the Government of Ukraine, demanding honesty, transparency and openness of the management system. As of today, 85% of Ukrainian have never been in non-post-soviet Europe, which means they effectively have never seen how the principles of rule of law, a proper democracy or the defense of human rights work in practice,” Iryna Sushko, Coordinator of Europe Without Barriers Consortium, informs.

“When Ukraine joined the Agreement to found the Energy Community on Feb. 1, 2011 as a full-fledged member, it meant the beginning of energy integration with the European Union. This means that, in time, as the provisions of EU legislation are implemented in domestic legislation and the regulatory base, the power sector and the economy as a whole will develop a competitive environment where the consumer will enjoy the right to select a supplier, and the supplier to choose which group of consumers to provide to”, Mykhailo Honchar, Director of Energy Programs, NOMOS Center, says.

EU environmental policy and legislation is a model of effectiveness for Ukraine, experts say. The 31 ecological Directives, to which Ukraine is supposed to adapt under the Association Agreement, will bring the country closer to EU standards while instituting these provisions will really improve Ukraine’s environment. Environmental well-being will bring with it other benefits, including improved human health, reduced mortality, economic advantages and new opportunities.

It is important that Ukraine should sign an Open Skies Agreement (OSA) and passengers stand to gain the most from it, experts say. Such an agreement will ensure European safety standards during flights, a high level of passenger services, more flights and more routes, and a wider range of ticket prices for air travel.

“EU membership markedly affects the country’s internal policy development. Thus, the government of Slovakia submitted resignation in October, because the Parliament refused to approve the expansion plan of the European Foundation for Financial Stability. It was not a case before,” Hryhory Mesezhnikov, president of the Institute of Public Affairs (Slovak), believes.

“All the efforts Poland has made towards European integration went hand-in-hand with the political will of its leadership. At first society expressed alarms about the changes, rising costs of products and services. After a while all those fears were cleared up. In 2004 the EU donated Poland 50 billion euros. At the same time Poland had to pay 20 billion euros for EU membership and eventually recovered expenditures for the committed reforms by getting 30 billion dollars,” Elzbeta Kasa, Expert of the Institute of Public Affairs (Poland), said.

During the event there was also presented a nationwide poll on Ukraine’s public opinion towards EU membership, conducted by the Democratic Initiatives Foundation and Ukrainian Sociology Service. According to the poll “a stable public support was formed towards the country’s accession to the European Union.” “The EU is definitely the choice of young people,” Irina Bekeshkina, director of Ilko Kucheriv Democratic Initiatives Foundation, is convinced. “Young people from Donbass and the Crimea, where the idea of Ukraine’s EU membership is disapproved generally, do not differ from their peers from other regions of Ukraine: within the 18-29 years age group 51% of young people are for EU membership, and 22% – against,” this is emphasized in the survey.

The passport of Association Agreement (AA) was also presented at the Expert Toloka as brief information about the meaning of (AA) for Ukraine, the procedure of its conclusion as well as what one should and should not expect from this document.

The Goal of the European Program is to promote Ukraine’s European integration by providing financial and expert support to relevant civil society initiatives.