Violations, non-conformity and manipulations by Russia of the Minsk agreements implementation: expert report

In the joint publication ‘State of Minsk agreements implementation: An unofficial Ukrainian experts’ opinion’, Hanna Shelest, Oleksii Izhak, Maksym Palamarchuk and Oleksiy Haran presented their assessments of the current state of the benchmarks implementation for peace settlement process in Ukraine as agreed by the four ‘Normandy format’ leaders in February 2015. This publication started the ‘Peace to Ukraine’ publication series of the International Renaissance Foundation’s European programme initiative.

According to Ukrainian independent experts, despite few steps forward made, the trend is observed of the systematic violation of the certain Minsk agreement’s clauses as well as serious manipulation of the others by the so-called ‘Donetsk People Republic’/ ‘Luhansk People Republic’ (‘DPR’/‘LPR’) separatist combatants and the Russian Federation. For the time being, the main violations and non-conformity lay in the security domain, which should be considered as a basic prerequisite for the political settlement.

Separatists’ troops, backed by Russia, are violating ceasefire on almost daily basis, using mostly mortars and heavy machine guns but occasionally also heavy artillery or “Grad” multiple rocket launcher system (MLRS). As a result, in total 430 Ukrainian servicemen were killed during March – October 2015. In general, for the period of 15 February – 4 December 2015 there were only 47 days (15%) without wounded and killed from the Ukrainian side. Even during relatively ‘calm’ September-October 2015, 54 Ukrainian soldiers were killed. In November-December 2015, shelling of the Ukrainian positions intensified. Thus, independent assessment confirms that what is in place should not be considered as a ceasefire but rather a low-intensity conflict.

In a clear violation of the contact line agreed for the ceasefire, ‘DPR’ maintains control over the town of Debaltseve and other territories gained during September 2014 – February 2015.

There is no sign of decrease of the Russian military contingent in Eastern Ukraine. More and more evidences appear of the new weapons modifications present only in Russia being found in Donbas. New Russian MLRS “Tornado-S” were even mentioned in the text of the Minsk-2 agreement. Recently, a heavy multiple launch thermobaric rocket system (TOS-1 Buratino, 220mm) has been spotted by the OSCE SMM.

As it is widely reported and confirmed by Russia itself, it continues to allow a free flow of fighters and weapons over the part of the state border not controlled by the Ukrainian government. Supplying separatists with fighters, ammunition, finance, and even regular troops should be regarded as taking a side to the conflict and thus defining Russia’s role as an aggressor state according to the UN General Assembly Resolution 3314.

All these evidences of the continuing Russian interference in Ukrainian internal affairs, violation of its territorial integrity and support of the separatist movements are too vivid to ignore. The European Council, which back in March 2015 agreed that the duration of the economic sanctions against Russia shall be linked to the complete implementation of the Minsk agreements, should take respectful actions to confirm the EU’s own adherence to the democratic values and principles of the international law. 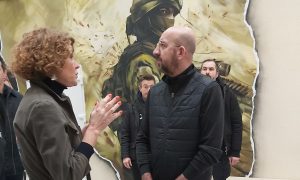